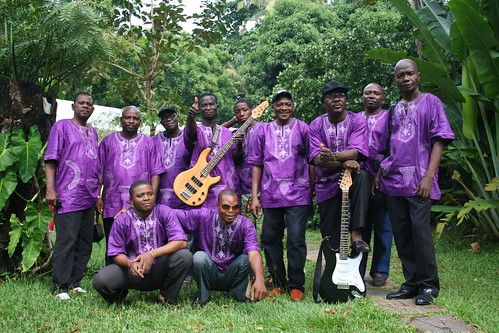 Orchestre Poly-Rythmo De Cotonou (pictured above) is possibly the oldest of the classic post-independence West African bands still in existence.  Formed in 1968, their 70's recordings are some of the most prized collectors items in African music; their catalog has been reissued by labels like Soundway, Analog Africa and Popular African Music.

Fans of these reissues assumed the band broke up a long time ago.  But they're still at it, with some younger members augmenting a few of the originals, and they made their first-ever European tour in 2009.  Their first new recording in over 20 years, Cotonou Club, will be released in the USA in April; you'll hear a track from it on this week's edition of Global A Go-Go.

I'll also debut Balkan-influenced recordings by Canadian banjo player Jayme Stone and American indie-rockers A Hawk And A Hacksaw, plus play recent releases by The Bad Shepherds, The Sway Machinery and Los Chicharrons.  And that still leaves plenty of time remaining for some classic 1970's tracks from all over Latin America.

The complete catalog of Global A Go-Go podcasts is here: