Frisko Freeze, The Sonics and Seaweed : Things I Love About Tacoma, WA presents:

Frisko Freeze, The Sonics and Seaweed : Things I Love About Tacoma, WA

Cause And EffectFrisko Freeze, The Sonics and Seaweed : Things I Love About Tacoma, WA 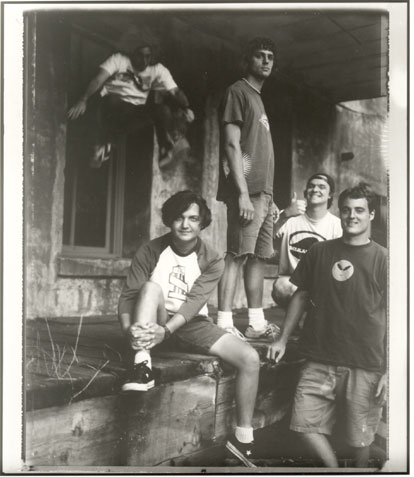 Seaweed's importance in the timeline of hardcore and punk isn't one that is written on every history wall. For whatever reason some bands get more credit than other over time and Seaweed has for the most part remained more of a cult favorite among those who like heavy music mixed with melody. The reality is there were the hardcore bands on labels like SST and Dischord who helped lay down some important stepping stones but the next generation of band who grew up on those records (not to mention lots of metal, classic rock, emo, and new wave) developed upon that base that further expanded into post hardcore. Much like Quicksand on the opposite coast, they were  offering heavy music with all these other influences of the day (not to mention that grunge was taking off in Seattle near where Seaweed was from so there are shades of that to Seaweed too). I truly believe bands like The Deftones wouldn't exist without bands like Seaweed helping to build upon the foundation of melodic hardcore with shades of Metal mixed in. Today there is an endless number of heavy bands shamelessly adding Pop elements but int he early '90s this was still considered strange and alien to folks who either only liked Pop music or just hardcore or just Metal.

Tune in tonight to hear a band you may or may not know (but should!) tell their story through the records of their influences and peers. From 7pm to 9pm tonight I will be playing music that Wade has personally selected and while he will not be in the studio with me, he has written little footnotes about many of the tracks and I will post them here.

Commentary by Wade Neal, guitar player of Seaweed who picked all the music tonight. THANK YOU WADE ! ! !

Download the whole show here (minus me talking – just music, yay!) Be patient it will take time to download as the file is big.

Jesu, Joy Of Man's Desiring 2:22 Leo Kottke  6- And 12-String Guitar – . My mom played guitar and had this record. It’s my first memory of being entranced by the sound of guitar strings. (Beatles, Stones, Floyd, the Who…still really the best bands to me. I have a serious classic rock gene. )
Gloria 4:13 U2 –  Under a Blood Red Sky  – I know there is this anti-U2 thing going on, and Bono’s hair was a problem, but I like em.
Know Your Rights 3:41 The Clash  Combat Rock – So I was 12 when this came out. My main source of music was the public library (which had vinyl, kids!), so Combat Rock was the most punk thing in there…and yay!. F. the man and dark, bitter humor…man, I LOVE the Clash.
Black Candy 3:00 Beat Happening Black Candy 1989   So I just figured out that Beat Happening was kind of the folk Joy Division or something…moves and everything! It was awesome to see them play in front of dumb hardcore kids who would boo as no one had ever booed before…we thought that was what punk was. Turn the tables on you, yeah! (PS – Seaweed do a killer cover of Foggy Eyes by Beat Happening)
Teen Age Riot 6:58 Sonic Youth Daydream Nation – 1988  Best video ever…thanks! It's worth pointing out that we loved SST bands a lot.
The Wagon 4:55 Dinosaur Jr. Green Mind – 1991 I bought two copies of this single when it came out. Why? The solo…J Mascis, a true wizard.
Turnout (Album) 3:14 Seaweed Four – 1993 – Sub pop – third long player
Let It Go 2:53 Superchunk Superchunk – both bands' first real tour! Love Superchunk. 1990, yeah…I remember meeting for the first time in NC, which was like a foreign country to us, after driving straight across the US in a pickup truck. Little apartment, a few beers passed around, the thrill of tour on the horizon. We were probably acting stupid. Jim Wilbur looks at me – "how old are you?" "19." Shakes head in disgust…"I am way too old for this…I'm 26, I should not be doing this tour…" Ha ha ha!
French Guy 3:17 Rocket From The Crypt Paint As A Fragrance – Love these guys.
Sieve-Fisted Find 3:24 Fugazi Repeater –  Some people called us "Fugazi Osbourne.." I like that. I hope they release the show at Chambers Grange Hall in Olympia – my vague memories need to be updated
Thru The Window 3:05 Seaweed – Actions and Indications – 1998 merge records
Savory 4:39 Jawbox For Your Own Special Sweetheart – 1994 – Quicksand, Seaweed, Jawbox, Girls Against Boys, Pensacola FL…that was a good show, we thought!
Clean Slate [Explicit] 2:49 Quicksand  Quicksand –  Brothers. Thanks for being in our band for a bit, Alan! -90s
Strychnine 2:13 The Sonics  My buddy’s older brother had this record – it taught me that real bands could be from Washington. I was excited that you could write songs about drinking poison. (this should probably be backed up to near the “top” of the timeline.)
Need 3:03 Mudhoney Superfuzz Bigmuff   We loved bands from Seattle, too. They were called grunge bands.
Dive 3:55 Nirvana   We liked all their songs, but this one is especially good. I remember playing Bleach for my rocker friends and telling them, these guys will be huge! “Nope, it’s boring.” They probably rewrote that little history later on.
Change Has Come 3:19 Screaming Trees Change Has Come  These guys were a bit older than us, and total inspiration to be in a band. We were lucky enough to play some shows with them over the years.
Flower 3:30 Soundgarden I like how this list is starting to look very “I love grunge” but back then it was just a little scene like Dischord bands and the like, so you liked them all, and I can’t go the “I liked Blood Circus a LOT more than Nirvana” obscurity hipster route.
Revulsion/We Reach 6:21 Melvins Ozma 1989   That maraca shaking still gives me the chills! Our bass player, John, put out this single on Leopard Gecko before it was on Ozma (Lucky!). We had the stupidity to cover a Melvins song at a house party in Oly. Got two middle fingers from one guy for that.
Crush Us All 3:59 Seaweed Spanaway
Trip Away 3:34 Jane's Addiction Jane's Addiction   This band influenced us to try to play bad solos.
Sun And Steel 3:27 Iron Maiden Piece Of Mind 1983 4th release  –  Piece of Mind was the B-side of a tape from 1983-84. What does this mean? This combination of tastes confused even myself when the rockers threatened to kick my ass for looking like a waver.
Altar Of Sacrifice 2:50 Slayer Reign In Blood – 1986 ; Remember the rockers I was talking about? We were friends by 1987.
Silence is Consent 1:44 False Liberty Silence is Content g These guys were from Bremerton – I was in a band with Greg Anderson (Sunn…etc.) called Inner Strength about a year before Seaweed started up.
Stay 2:34 Treepeople  Guilt, Regret, And Embarassment – first full length – 1989 –These guys taught us that amazing musicians can also move from Boise, Idaho to other parts of the world
Seeing Red 1:03 Minor Threat
Rise Above [And What You Give Is What You Get] 2:27 Black Flag – Damaged– “Hey, Wade listen to this on my tape Walkman on the bus, it’s SO HARDCORE!!” Now I hear it as supremely kick ass rock and roll.
Nation of Sheep CURSE 2:21 Christ On A Crutch Crime Pays When Pigs Die 1991   Pine Street house basement show
RAGS AND BONES 5:06 NoMeansNo Wrong – . Half of Seaweed loved them and the same half still does.

Values Here 2:24 Dag Nasty  Can I Say  1986 dischord – April 1, 1987 – Community World Theater.http://www.gigposters.com/poster/79507_Dag_Nasty.html . I remember this show like it was last
night. Amazing band, and a huge influence on Seaweed, obviously. Note – flyer by Neko Case!
Could You Be The One? 2:35 Hüsker Dü  Warehouse: Songs And Stories  – 1987  – I am going to go with a Warehouse song, because that’s what I could get from my Columbia Record and Tape Club catalog…”Could You Be The One” – I spent an odd sophomore year in Wisconsin (didn’t like it), but it made me feel better knowing that Husker Du was from Minneapolis. (?)
You're Related 2:36 Doughboys 1987 – r Taught us how to jump around and play to small crowds with enthusiasm.
Kid Candy 4:18 Seaweed Four  – Wade picked the all the songs – interesting that he picked two from Four.
Rotation 2:57 Alphabet Swill – After Clint, Aaron, and I started playing music together in 1989, we sought out Bob and John from the ashes of this amazing cow-punk band. They had opened for the Circle Jerks, so they had major credit – and Bob had a house with a basement in Olympia – the Puget Street House.
Peach Kelli Pop 3:57 Redd Kross Neurotica  1987
Through Being Cool 3:14 Devo – New Traditonalist   nerdy waver, still am, really. A-side of a tape from 1983-84.
*******Not played on air but on the Download**************
Go Your Own Way 3:52 Seaweed  recorded at Clint’s house, as was the whole Four album. You can see the back yard and house in our “Measure” video. I was very happy with the way the solo turned out. Yeah, every one does ironic covers, I know. However, we really love Fleetwood Mac!
Chalk The Cracks – Steve Brodsky 4:11 Steve Brodsky Hours And Hours A Tribute To Seaweed 2008 – tribute to Seaweed!
Beach – Spook and the Zombies (Aaron Stauffer solo) – Magic Ribbons Box Set