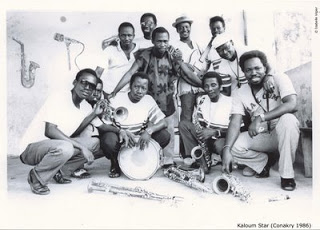 When you’re a fan of African music like I am, one of the things you learn is that for every world-famous artist like Salif Keita or Youssou N’Dour, there are a hundred obscurities who are just as worthy of international attention.

Maitre Mamadou Barry (far right in picture above) is this week’s case in point.  His band Kaloum Star (pictured above) was one of Guinee Conakry’s national orchestras (Bembeya Jazz National is the most famous of their peers) yet they released only eight songs in that time.  He’s gone on to be chef d’orchestre for Les Amazones De Guinee and worked with Sekouba Bambino, the aforementioned Bembeya Jazz and just about everybody who’s anybody in Francophone West African music of the last 50 years.

Barry released his second solo album in June, so now’s a great time to give the man his due.  On this week’s program you’ll hear a track from his new album, one by Les Amazones and an unreleased live recording of the amazing Kaloum Star, courtesy of the music blog Worldservice: http://wrldsrv.blogspot.com/2009/03/kaloum-star-live.html.