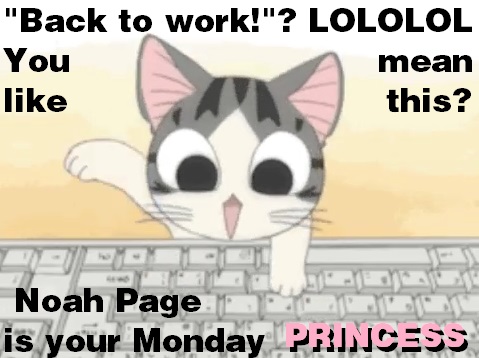 Oh no. Noah Page has really done it this time. Just kidding! I’m GREAT. And I hope you are too! Why wouldn’t you be?

Oh, because it’s Monday? Well, don’t worry about that, friend. There are plenty of Mondays out there in the world, and they hardly ever regard us as a threat. They don’t care about no small potatoes like us. Little potatoes just hiding in the garden. Wiggling in the dirt.

Anyway, sure: we’re never totally safe anywhere. Sometimes you’ll just be coming out of the gas station, eating your Pop-Tart ™, and a Monday will just pop up out of NOWHERE and TOTALLY get you ALL THE WAY. And that’s awful. I’m sorry, dude. I wish that wasn’t the world we live in. But you know? You can’t live in fear of that. We’re all just taking our chances in this life, buddy. Random number generation. You know? And no two snowflakes are alike. And everything. Right? You follow me.

Besides, work isn’t so bad. I know it’s not our first choice. I mean: duh. Sure, it can be boring. Maybe mundane. Maybe trying. And you feel like a weekend person who doesn’t belong in this weekday world. But consider this: how much of our lives is as freak out crazy exciting fun and awesome as those perfect moments, the ones we live for? For most of us like 3% on average. 7% if you’re lucky. 13% at absolute MAXIMUM. Remind me to tell about the scientific research behind these figures when I’m not ON A ROLL like I am right this second. Anyway, 13%. But does that get us down? Of course not! It’s a LOT, all things considered. 13% is a blessing. It’s a lot more than 0%! And those fleeting moments of perfection make all the other stuff worth it!

And what about all that other 90-ish percent of everything in life? For a big chunk of that we’re being boring, doing mundane or trying things. That’s a lot of time to spend like that. What if maybe the way we choose to live in those moments is more important than we like to acknowledge? And we can still be weekend people while we do all that stuff. It’s okay to be weekend transplants here in this world where we don’t belong. And the weekday people we see and meet at work will think we’re all the cooler for it. “That guy isn’t from here,” they’ll say. “That guy’s a weekend guy. I think he thinks I’m cool,” they’ll brag, if you like them even the littlest bit. “I hope one day I make it to the weekend.”

And that’s when you walk by. “One day, dude. One day you will,” you’ll be like. I mean, you might not LITERALLY say that. That’s just what you’ll be LIKE.

So let’s do it, guys. Let’s get in there. Remember, this isn’t forced labor. We can leave if we want to. We don’t have to be anywhere except wherever we are. And here we are now! Work is just fundraising for further weekends. And we ARE the weekends. So what better cause have we got? Let’s work!

Now so listen. So you go in there. And you beat that Monday to death! I’m serious! Make it super violent! Oh my gosh! This is all just positive reinforcement. I want to be afraid of you the next time I see you! Like, really! YIKES!

No wait, before that: listen to some music with me. Let’s hang out. I’ve got that Noah Page playlist you need right now. Plus, you almost forgot your coffee. Sit down and let’s just drink a cup together. We’ll listen to some Busta Rhymes. Some Wings. We’ll listen to those Psy and Mystikal songs that we all love so much now that we know about them. And we’ll take a second to be thankful that we do, and for other stuff. We have so much to be thankful for: egg sandwiches, Princesses, Suzie Stardust, and the list goes on! This’ll just be a nice time and positive vibey and good.

Also Broken Social Scene and stuff is in there, because we’ve all got feelings, dude. Let’s feel them, together. Like a team! Like a family. I know you act so tough sometimes. It’s okay. We all think you’re perfectly cool! For real. You can loosen up a little. It won’t hurt ya!

And we’re just relaxing right now. We don’t have anything in the world to stress about. We’re just getting fully charged. This is your breakfast. These are your Pop Tarts ™. Start this week off right. Don’t worry! It’s all good! We’re all friends here! And I do mean everyone too! Everyone is your friend. The world is your breakfast. Friendship. And there’s nothing wrong with anything.

Except that it’s Monday, right? LOLOLOLOL!!!

Princess Noah Page, 2017
From Days of the Week Part 1: Mondays