Meow and Forever! With Erikka J and Zhe’ Aqueen! 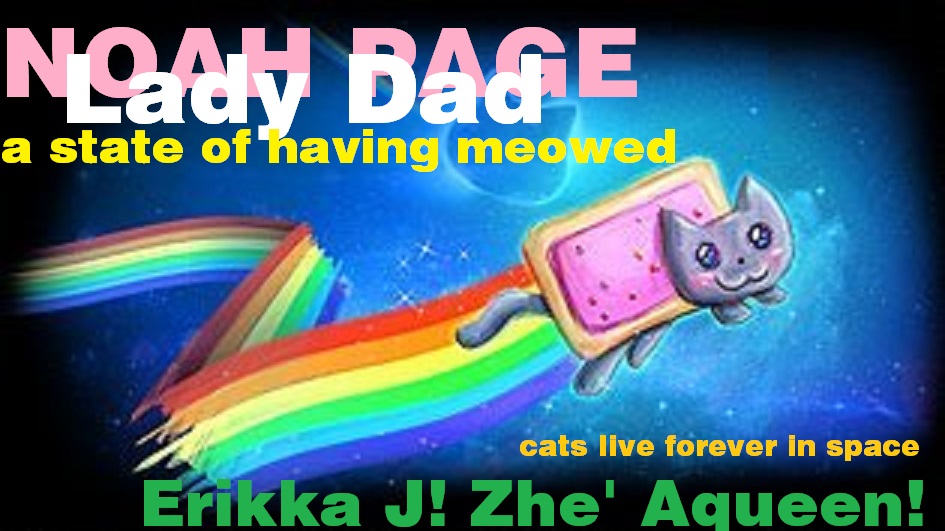 Kittens of the city, Noah Page will always leave a saucer of milk out for you on the back porch of WRIR. This isn’t an ending. It’s one moment in an endless cycle of transitions.

A lot to think about this week. Possibly the final episode of Meow Mix, but next time around DJ B Rice takes the reigns to host his own program featuring the beasts of hip hop lurking around the corners of our pretty little town. Erikka J is leaving town for bigger and better things, but new and emerging artists like Zhe’ Aqueen are always blossoming in this quaint bunch of buildings we call a home on The Planet of the Cat. And the unstoppable, infallible monster of time is on our minds a lot right now, with the sudden passing of the Honorable Sleaze, Sleazy Wonder, Sleazen Seagal. Sleaze.

In celebration of the irreversible churn of spacetime’s machine, and all the good times we’ve had in it while it slowly degrades our bodies and minds, we’ve got a slightly different show this week. Zhe Aqueen plays live! And VERY special guest Erikka J tells us about her upcoming farewell show.

It’s important to remember and cherish each moment, felines. It’s impossible to know which are the best until they’re gone. Meow Mix has been one of my favorite programs, and it colored my approach to being a radio personality. I don’t know what is going on with it, honestly. I’m totally in the dark! Maybe it’s not even over. Maybe it’ll have another one million, three hundred ninety seven thousand, and three episodes. But I’ll tell you why it’s important anyway. At least to me. We all meow differently. In fact, I miu. Early on, the amazing and wonderful DJ Lylas and I were looking through WRIR’s playlists.

She pointed to a Lady Gaga song from a recent episode of Meow Mix and told me, “This is important. The mission of WRIR is to give a platform to underrepresented ideas, music. But you also have to have fun. People enjoy it when you’re enjoying yourself. Fun begets fun. So if you love a song, even if it’s wildly popular, it’s important to play it. Sprinkling those things in here and there doesn’t defeat our mission. And to the other citizens of this crazy light show who love that song too, that song is a rare souvenir, tucked in their item cache, reminding them of where they’ve been and the times that’re gone and past. We have to remember those things, those times, and moments as we continue on this total bananas journey through monkeyville.”

I’m paraphrasing quite a bit. But that informed the decisions I’ve made when hosting these improbable programs more than anything else, probably. Knowing I wasn’t tied to someone else’s idea. That this station, like the world, is a beautiful work we all make together. Everyone has something new to add. What a beautiful giant ball of all our chewing gum. I think we should keep it, this world.

And that leads me to Sleaze. A man I barely knew, but respected and admired. I’m sure I annoyed him, running my fanboy business on him constantly. But he was always gracious, and told me I was cool the last time I saw him. It was a small thing from a dude I’d known for a brief time, but it meant something to me. I thought that moment was one of an infinite number, stretching before me. But it turned out to be finite, ended the second it was over.

I reflected on it a lot after his passing. I’d dislocated my shoulder the week before. I hated being strung out and confused on painkillers. It reminded me of all the times I’d been able bodied, able minded, and yet not done what the mama cat licked me for doing.

All these things. They slip through our fingers like sand. Like litter. It’s the litter our of own boxes. You can’t hold it. You can’t keep it. But just enjoy the way the light hits those crumbs as they fall away. More is always getting poured out of that bag of Mr. Whiskers.

We meowed. We out. Meowed out.