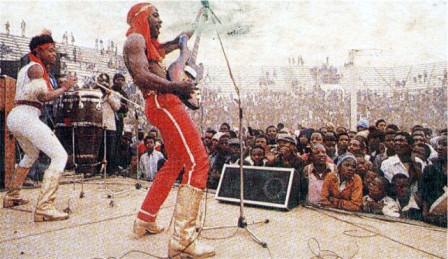 Rick James (pictured above) on Global A Go-Go? No, and he better not grind his dirty boots into my new suede couch. Actually, it’s bass player and producer “Om” Alec Khaoli, whose music was as popular in South Africa in the 80’s as Rick James’ was in the USA in the same decade.

This week on Global A Go-Go you’ll hear a selection of Khaoli’s best from his bands The Beaters, Harari and Umoja, including a couple of new reissues from the Awesome Tapes From Africa label.

Also this week: Meklit and a few other globally-minded singer-songwriters, new sounds from Gogol Bordello and Peyoti For President, and two species of West African guitarists: delta bluesmen and arena-rock shredders.