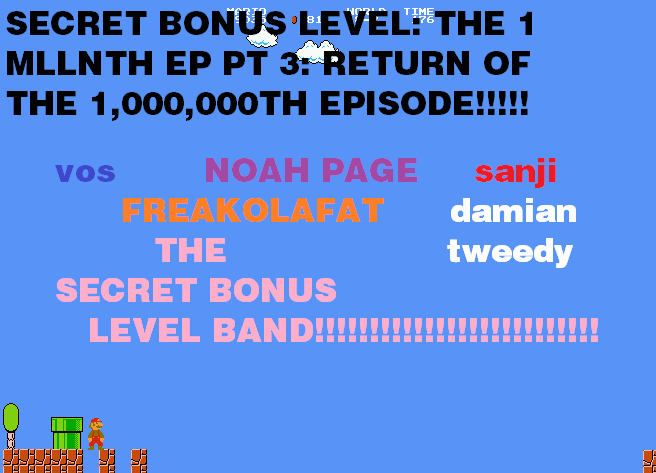 GUYS. THIS IS SERIOUS NOW. STOP WHAT YOU’RE DOING AND PAY ATTENTION. THIS IS NOT A DRILL. URGENT SITUATIONS. URGENT FEELINGS. IMPOSSIBLE FEELINGS. IMPROBABLE DAY DREAMS. This, tonight, this moment, this day, RIGHT NOW.

The GRAND debut of The SUPER Secret Bonus Level Band! Jesse Lyles on the beat machines. Brandon Rice cooking up a hot side of bass. Joe Barry melting his guitar into a thin layer of goo that I had to mop up. JOHNSON on the keyboard. JOHNSON on the sax. JOHNSON on the room mic, reminding us that jazz and funk are the brothers and sisters that need our hugs the most. All these die hard with a vengeance fellas holding it down so hard it hasn’t even tried to get up YET! These guys KILLED it all night rocking out hard, playing improvised beats LIVE for all our favorite rappers to spit to.

Our favorite rappers, you say? Why yes, I say. Damian Tweedy, I say. FREAKOLAFAT. Mr. Vos Himself. Sanji the Dreadhog. MC Correct, making us want that music video SO BAD PLEASE JUST SHOW IT TO US ALREADY WE ALREADY KNOW IT’S GOOD. Juan Egg n’ Cheese (a hungry new friend). And, why not NOAH PAGE in there too? Nothing wrong with that guy. Yet!

We only played FOUR fatherly tracks from the archive all night, you potato wedges! Other than that: it was all LIVE performance. NO PRE-RECORDED BEATS. NO PRE-RECORDED RHYMES. All in the moment. One time only. Created ESPECIALLY for you.

Gosh, and it was crazy. What all happened? WHAT ALL HAPPENED? Well:

FIRST OF ALL there is NO WAY I’ve talked about The SUPER Secret Bonus Level band yet. These guys. WHEW! I felt like I ate a hot taco. A WAY too hot taco! I was sweating. I was done. I never stopped! I was on. I was off. I was there. I was gone.

And who are they? Well, okay: Johnson. A musician, a rapper, a producer, a maker of beats. From another planet, most likely. I can’t even tell you. Vos tipped Noah Page off to this guy way back a few weeks ago. Ask him about his mouse clicks. HE DOESN’T DO THEM. How is that even a thing? Think about your mouse. And all those times you click it. He just DOESN’T. Current theories are that he’s either an alien or a robot or a clone or two out of three. Because the way he does just EVERYTHING now. Music drips from his pores. I can’t say enough. Maybe the heart of the band.

And then there’s Brandon Rice. This guy. You could call him a bass player. And sure, that’d be fair. But listen. He hits a hard bass and the bass goes, “Dude, that was hard.” That’s how hard he is. He’s done a lot. I can’t speak to ALL of it. I DON’T HAVE THE TIME IT’S TOO MUCH OKAY? He’s just a musician man active about town in all kinds of ways. We’re lucky to have him, taking time out from all this other stuff he does. Chillcast for one. The short-lived but famed and fondly remembered open mic on the second floor of Home Sweet Home, for two. There’s like also a three through one million. GUYS, I ALREADY SAID. I DON’T HAVE TIME.

And Joe Barry. Joe Barry, fellas. Ladies? Joe Barry. A beard Riker envies. A style you can’t get from THE BEST hairdresser. Not on your head, clothes, body, whatever parts you’ve gone. This man’s guitar. This man’s guitar FACE. This man. Shredding. I just HOPE you’re not cheese, dude. Because of the shredding. Get it? You get it. And I mentioned that puddle of goo I had to mop up afterward? Yeah, really. THAT USED TO BE JOE BARRY’S GUITAR. Don’t ask me how it happened. I don’t know why that’s even a thing. This guy’s sweet hands. And you know what he said to Noah Page, like right before they started. He goes, “Tuesday Verses, man.” For real. This guy. He just GETS it. Vibes.

And so FREAKO and DAMIAN fracking SANG!? YES! And in harmony! IN HARMONY, YOU GUYS. I had no idea they had it in them! Who taught these dudes? Who TOLD them? Wow. I was gone. While Sanji beat boxed? How and why did all these hidden talents burst forth in such an incredible thing?

MC Correct dropped some straight POETRY from his upcoming album over a deep groove from the band. Groove so deep we had to climb back out. And it was so chill that we all had to put on extra sweaters. EXTRA sweaters ON TOP OF the sweaters we were ALREADY WEARING! Brrrrrrrr! It was like that taco hadn’t even existed. Remember the taco I mentioned earlier? The way too hot taco? MC Correct TOTALLY negated my taco. I don’t even

Sanji was an animal on the microphone ALL NIGHT. You already knew that! Bark at him when you see him. He’ll know what you mean! I’m telling you about all these guys so much. But you already know about Sanji. I mean, geeez. I HOPE you do.

Vos became a wizard. A straight wizard. Hosting this show from the DJ booth. Rapping from the DJ booth. Running the entire radio station with two hands, each stronger than that one Noah Page uses. The new secret host of this secret show. He practically cast Summon to invite the entire program from the negaverse and STILL had all those solid bars in him.

Probably the best game of Who Can Rap to That we’ve ever played. For real! Noah Page unwittingly stumbled into rapping over the Imperial March totally by accident without even meaning to compete. Sanji DESTROYED the theme song from Full House, I’m not even kidding. Vos spread some butter over Link Wray. Freakolafat dropped a big fat juicy one right on a LIVE CUT of Broken Social Scene!? Guys, WHERE does this stuff even happen?

Oh, gosh. And yes, we made a new friend. Juan Egg n’ Cheese. Maybe we’ll see him again one day. I hope so. He’s a weird, mysterious dude. He walks away really slow after you all finally say goodbye, always looking back at you every few feet. And you’ll be like, “What’s that?” And you’ll never know. He just lingers and likes to stick his hands in the fridge JUST TO COOL THEM OFF NOTHING SUSPICIOUS HAPPENING THERE WHAT YOU’RE HANDS DON’T EVER GET HOT SOMETIMES TOO? Sheesh!

I know, I know. This was a long one. But this was an important one! I had to say more. There was more to say. Just please shut up about it. I’m almost done.

Let me speak in your normal human language for a moment to be real with you about something: a big part of the reason this show was so great was the audio production provided by WRIR’s resident live sound expert Jay Westermann and Princess Beet Farmer from the Friday Morning Breakfast Blend. I’m really indebted to these guys for being such a huge help to our program. And for no real reason! They just thought it was a cool idea. That’s a big deal considering how many people told Noah Page not to even attempt this show. Really, a lot of people said this was too ambitious to work; having a live band every week and a bunch of random rappers who may or may not show up is a really crazy premise for a show that happens once every seven days. And just because these two thought it’d be neat, they took the time to come in for hours in the middle of a Wednesday night to help us have some amazing quality sound from WRIR’s live room. I can’t say enough about them. They’re real pros. As Jay would say, “Do you know how much an engineer is supposed to be paid?” Well, these two didn’t get paid anything. Nothing at all. What else can I say about that? I’m so just in love with these two. I’ll probably be cleaning their bathrooms from now until the second millionth episode. Really. My heroes.

What happens next week? What doesn’t? Will there be a next week? A part four to the fabled, famed one millionth episode? We’ll just have to see. And hear. And listen! And watch. AND LEARN!

You guys, the REAL value here is everything we LEARN. This is your education. Take it seriously. It’ll take you everywhere in this life.

spra-BAAWWWNNNNSSSSHHHH!!!! Ka-chik. That’s the sound of the printer spitting out all those release forms we all have to sign about what happens in case we DESTROY THE RADIO even worse. And we do. And we will. And we’re out.

BOOM (that isn’t a printer sound). Next week!