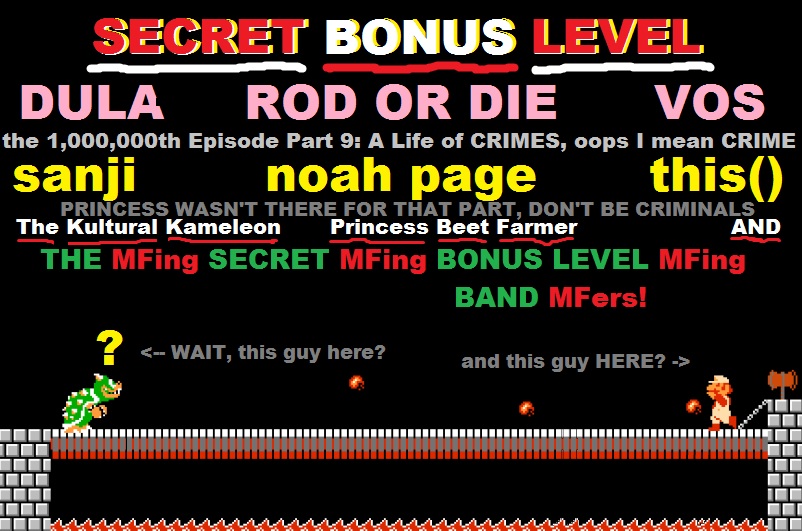 Tonight’s episode: how to avoid being a criminal. Step by step instructions provided by all your favorite rappers. The reason we felt you needed this guide to staying out of prison? Because the Secret Bonus Level album is coming. We know you’ll need it badly when it drops. And since it’s getting released through some unusual channels, you might freak out trying to lock down your copy. Yeah it’ll be in record stores, but for FREE. Imagine the insanity. Stifle the urge to do crazy things to get your hands on this coveted, special LP. That’s the main thing. Use this time to prepare yourself mentally. You have to contain your excitement JUUUUST enough to avoid robbing Noah Page, Vos, or your local record store if you want a copy. A few tips to keep yourself in check:

3. RESIST the caps lock key AS MUCH AS POSSIBLE. I’m already working on this one. Maybe you can tell?

We can’t all be the Kultural Kameleon – popping out on with a rap verse EVEN BETTER than Black Liquid ever heard us utter just because we felt like it. Master those animal passions. You have time! You can do it.

For most of the episode, we had Dula and Rod or Die behind one microphone, taking turns. Tag teaming it like Randy Savage and Hulk Hogan. Blowing it up like baking soda and vinegar in the majesty of this paper mache mountain we vulcanize within. This() and Sanji from Witch Mountain were on the other microphone doing the same. You already know about their Savage Hulkdom science project magic too. It would’ve piqued our mathematical curiosity enough having one of these two chemistry projects going at once, but then pouring all the ingredients together into the same test tube really made the whole thing change color and fizz up. Just like on TV!

Sanji and This() are also involved in this new thing called Chum Media. They’re creating all kinds of videos and content for the internet and stuff, but they also have this warehouse space where they’re holding events. These guys are really in their business. Organizing, networking, financing, RE-financing. When you see them in their suits, you’d better know they’re not here to hand you some book of Mormon. They’re going to WORK. And their first two events at the warehouse are coming up this weekend! Friday is a DJ set thing and a dance party. Saturday is a show with Alfred, McKinley Dixon, and some other dudes. It’s at 2007 Brook Rd. So I imagine you have to go back in time TEN YEARS to a time when Brook Road was but a mere stream street. For real though. The address is 2007 Brook Rd. noah Page’ll be there both nights. IN THE PAST (2007). And the future (2017). It’s BYOB so bring your favorite radio personality a drink!

We all know about how great This() and Sanji are as far as rapping, because they’re on a lot. So let’s take a moment to glance at the stats and combo moves our newest unlocked secret characters, Dula and Rod or Die. The way these guys operate together is really impressive. Taking turns at surgery, assisting each other. “Scalpel.” “Sponge.” “Et Cetera.” Rod has some very impressive technical skills. Toward the end of the first hour, he gave us a fast-paced verse that made us all LITERALLY yell. Dula has this smooth a melodic approach. His flow is NICE, but whereas Rod is in hyperdrive, Dula is in one of those fold out beach chairs, so cool even his drink needs an umbrella. He also does these little sung parts while other dudes are rapping that aren’t really adlibs as much as another layer of music, really. I really like those And his hooks! I didn’t know we needed hooks until the first week this guy showed up. Now I don’t think Secret Bonus Level would be the same without hooks. I’m about to just sit Bonus Level down on these hooks like Spongebob in that one episode where it isn’t a good idea because THIS TIME IT IS A GOOD IDEA.

But yeah, the first week these guys showed up, again, was our absolute bananas rap party where the whole CITY was in the studio. 15 rappers and singers. Rod or Die and Dula clearly stood out to me that night, but there were so many verses flying around and the mic got passed so quick that I worried their shimmer might not have caught the eye of our listeners eye who so eagerly pressed their ears to the disorienting kaleidoscope of rap and music that was last week’s show.

Nice guys too, Dula and Rod. I really think they’ll go super far because they’re really great to work with. Talent is one thing, but a talented jerk never gets anywhere. Dula and Rod or Die are cool. Planning out different parts of the show with these guys on the fly was great. They kept it fresh in the moment, acclimated instantly when weird things happened, and even were great sports about Can You Rap to That?

Can You Rap to That? is funny, I’m finding, because it’s supposed to be a silly, fun game that we use to take some pressure off our rappers. Being on point and entertaining for two hours on our show can be a lot of pressure. I always thought Can You Rap to That? would be a way to get the guys laughing again halfway through the show. But I’ve noticed it actually really brings out a person’s true colors more that you’d expect. We’ve had rappers get really upset before because they got a weird beat and just straight up refuse to rap to it or else get actually frustrated with us running the show because they feel like we’re trying to make fun of them. But Dula and Rod really got it. They just understood the whole thing and had fun. It’s a challenge and is supposed to be weird and stupid and goofy and difficult.

Tonight’s episode was more laid back and low key than last week. And we were glad for that, in all honesty!