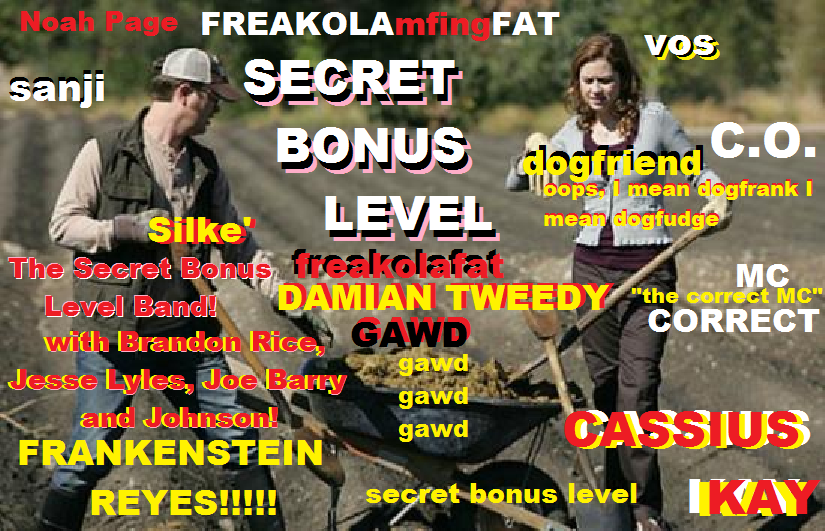 Before anything else happens:

Okay, now let me tell you some things.

Seeds. Everything starts with seeds. The world itself actually grows on seeds. Well, actually the seeds grow on the world, technically. But look, what I’m saying is — have you guys seen Fury Road? Because you know that little old lady from the bunch of the scavenger raider war ladies? She led Bane and them past that swampy mud patch that was supposed to be so great but it ended up just being an old dead tree and they didn’t even know what a tree was anyway so BIG DEAL, am I right? Anyway, remember that part where she pulled out that little bag from her big bag and showed it to the one armed Charlize Theron with her head all covered in engine grease from just the eyeballs up in that particular way? Well, what was in the bag? The world? NO. It was a bunch of SEEDS. Duh. Seeds. That’s the point. They had enough of the world. If they were going to make anything out of anything for themselves, it was seeds that they needed, dude.

Even little tiny babies come from seeds. Loose definition of a seed, sure, but everyone says it. It’s a common metaphor, okay? Get off my back. And the babies turn into people. And the people turn into more babies. But it’s all about the seeds. It all starts with seeds. And, I mean, I guess by now you’ve figured out that I’m not writing about seeds in the most literal sense, but rather doing this kind of philosophical, simile kind of breakdown of the whole concept of beginnings. Because I want to talk about a very particular kind of seed. The kind that don’t exist. I mean, they DO exist. Gosh, this is confusing.

Okay, so look: no more games. Things start small and grow big. It happens to everything. Babies, animals, snowballs that accidentally got started rolling down hills somehow, who knows why, and just collect more snow as they go until it really starts to seem like maybe somebody should do something about that snowball because it’s really big and could present a real problem for somebody at some point in the future if nobody does anything about it. And also seeds do that to. The growing part.

I guess my whole point with all of this is that we had to start somewhere. Secret Bonus Levels don’t just grow on trees. They grow from seeds. And, by the way, yes I know that trees grow from seeds. Look, okay, just forget about the seeds. I’ll tie this all together if you just bear with me for a second and stop asking so many questions about all of this because it’s really hard to keep my train of thought with you always interrupting me about these finer points and clarification.

Tonight’s show was really, really good. The Secret Bonus Level Band played this Kendrick Lamar song and everybody rapped over it. The band was just SO good, all around, too. Frankenstein, who we love, was back. Dogfriend, my new favorite guy, taught me a new handshake that’s hilarious. FREAKOLAFAT WAS BACK AGAIN. AND DAMIAN TWEEDY. Damian, I really missed that guy. You probably remember him from the first few Bonus Levels. He is just so consistent with his style. Is he the best rapper in the world? Of course not. But he’s never bad. And that’s important. I’ve watched some GREAT guys fall flat on their faces on Secret Bonus Level before. And Sanji was there and Vos was there and MC Correct was there and all of us, all of these guys, we’re really starting to just feel right together. Like a team. Like a squad. Or something.

And not only did we continue on in our valiant, though young tradition this evening, but we also continued to bloom into whatever this crazy flower smells like it is. Freakolafat brought Gawd along, a young rapper whose eager enthusiasm for perfection in his flows was truly admirable. That dude is never going to put out a bad record, I’ll tell you what. He critiqued himself expertly, even harshly (even though he really rapped well), and Freako’s response. Freakolafat, who has been with us since the beginning, you know what he said? He told this guy, “Do it again.” I was amazed. He said, “Go rap again. If you weren’t happy with it, try again.” And he did. Also Silke, our new ally from Infuzion, brought along a couple of the best rappers from the event he’d thrown earlier in the evening. C.O., who took a number of lengthy turns on the mic toward the beginning of the show and really nailed it. We’ve seen this guy perform at Infuzion a few already and can’t wait to see what he develops into. He’s pretty versatile, but I can imagine him being the kind of rapper you recognize instantly in any context. Like when Eminem was on that Akon song. It seemed weird at first, right? But it fit perfectly. And right away, even though it was totally unexpected, you were like, “That’s Eminem.” And of course, the breakout star of the evening, Cassius Kay. He was hardly ever more than 2 feet from the mic at any point during our two hour show. Never stopping with the writtens. Cool as cucumber WANTS to be. Never broke a sweat. Made it look easy. With bars so good that even Daniel, our new little trainee guy, was compelled fully to bring his a closed fist to his trainee mouth in surprise. That matinee bar? You’ll have to hear it.

How did we create something with the potential to do this? I remember moments when I noticed our progress. The passion of these artists blossoming. The eternal vibe of time spinning the world in the correct direction for once. Truly remarkable moments when I realized something good was happening. The time I was explaining the FCC rules to Freakolafat and he looked at me so earnestly, like a friend, and said, “Now that you’ve told me, I’ll tell everyone else.” I hadn’t even asked for his help! And now he’s bringing in Gawd. When Jesse Lyles, our resident chief head surgeon of drums and rhythm, told he’d brought ANOTHER new batch of tech to show and proceeded to blow us all away with new effects, fills and sounds that both fit in perfectly and drove everyone to the next level. Drums in reverse, stutter, all kinds of stuff. And Joe, who I’ve really enjoyed watching become comfortable with the band, following suit or maybe just inspired by his own steam, switched up his own effects with some reverse delay or just SOMETHING I don’t even know. His licks and riffs have gotten so good lately.

Just the band, the rappers, and everything about the show has gotten so good and continues to change and get better all the time. I notice it slowly and all at once. In those special moments and in-between. And sometimes I ask myself: what were the seeds? Where did this all grow up from? How did it turn into this?

Did something special start the first time I saw Sanji rap in that weird office space behind Sound of Music? Or the night we met MC Correct, and something about his kind eyes or whatever compelled us to spend forever trying to inflate his tire before anyone had even heard him rap or anything? When Jesse first turned the keyboard around backwards in my living room, before there even was a radio show, set it to the drum kit, and made a moment I’ll tell my grandkids about out of nothing but steam and sugar? When Vos first spoke about video game music on Cause and Effect? How do these things begin?

And more importantly, why don’t they fizzle? What sustains them? Seeds need water, sun and dirt. Those ingredients aren’t always readily available in the approximate proportions necessary. Sometimes you need someone to help things along. Secret Bonus Level, of course, is too special, too magical to come to fruition under the care of some dirty old farmer, overalls ripped and views on social justice wildly outdated.

Let me not get weird about it. Okay, look. Princess Beet Farmer may not be running sound on Secret Bonus Level for forever. She is looking for a job right now and might very well take one that requires early Thursday mornings. Early mornings are really her thing. She’s been pushing herself beyond the limit of what her body can normally tolerate to run the board and make our show sound as beautiful as it has for months now solely out of the love for the music. Her passion for it has renewed my own more than once. So, just in case she isn’t around soon, I thought we’d honor her, just once, with a special Secret Bonus Level tribute that I didn’t even think about before the show aired because I suck so I’m writing about it now as a blog post LOLOLOLOLOLOL, I’m sorry! I suck. And this isn’t just because some would say she’s of special importance to me personally. She’s as much a part of the essential brain trust of the show as Noah Page or Vos himself. We wouldn’t have be able to do any of this without her. And there will always be a tiny window box out back behind WRIR for her. Right next to the saucer of milk for Meow Mix. And the puddle of melted licorice for Black Liquid. That’s my little shrine to all of the things that were too good for this radio broadcast world. And Black Liquid, who actually sucks but I guess I’ll include him anyway.

Also, hey, you know what? She may not even leave at all. Either way, let’s recognize her service. We did it for Vos. We do it for everybody. A million is a lot of episodes. We can’t expect everyone to hang out forever. One day we’ll be dead.