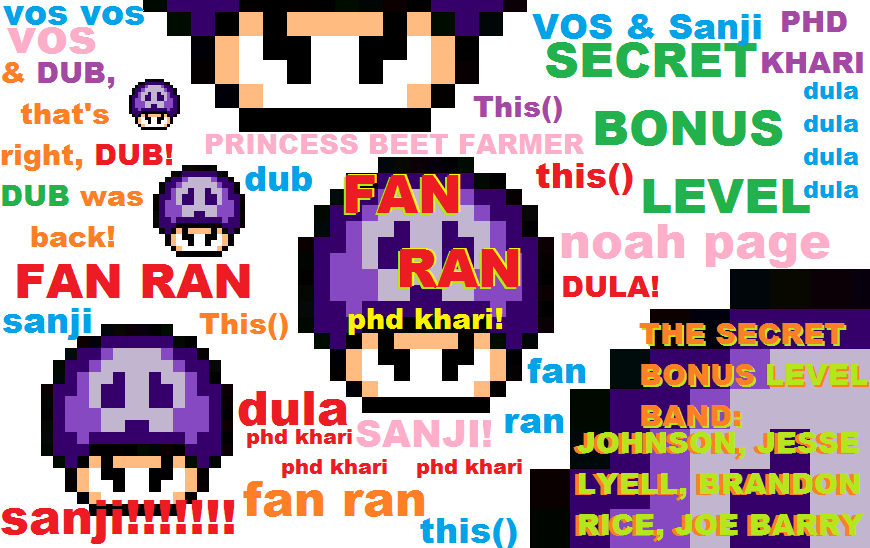 Hey, if you’re reading this now, I just bet you’ll probably want to:

Right Click here and do “Save as” or whatever to download this episode and listen to it later on your iPod or save it forever in your personal archives.

Well, well, well. Here we are again. The band is back. Thank crying little baby Jesus for the band, holy christ in heaven. DUB is back. PHD KHARI is back. I mean, PHD Khari has been here for a while. He’s been on like, every single episode for a minute. But he’s back too! I like Khari. And he’s got a PHD, you know? So if your philosophy is hurt, he can heal it.

And Vos and Sanji and Noah Page and Princess Beet Farmer. Oh and Dula and This().

I don’t know why, but in all honesty, I don’t feel happy with this recap of this episode. Dude, this was a REALLY GOOD episode. I just don’t feel like I’m conveying it well. And that’s a real shame, because we had a very special guest on tonight who REALLY killed it. And the band killed it. And all the normal guys killed it, like always. And gosh, you know, there was just so much talent on this one. It was SO good. So why can’t I write about it that well? I don’t know. I suck sometimes. But we all do. Sometimes. That’s just how life is.

Hey, you guys want to hear a funny story? Okay, I’ll tell you one. But first: hang on real quick. I’ve got to speak on the man of the hour first off.

FAN RAN. One of the coolest guys I’ve run into in Richmond. He’s got that mustache, first of all. VERY cool. Beard guys, I mean, do your thing. I know there’s a lot of you out there, and you probably hear some disparaging things about how you’re just following a trend or whatever. But you know what? WHO CARES? Have a beard if you want one. Fan Ran has a SICK mustache, is all I’m saying.

Okay, mustache aside, what else do we know about Fan Ran? First of all, Noah Page wanted to meet Fan Ran in the first place all because he produced Noah-O’s last project, Dirty Rice. And dude, it sounded VERY good. The beats especially. Noah-O, of course, is always growing and changing and going through the struggle of evolution and progress that all Noah’s share. Ask Noah Scalin. Or some other Noah.

So yeah, Dirty Rice! The beats are great. And Fan Ran has been with Gritty City since forever. That’s the same Gritty City that brings you Rah Scrilla, Reppa Ton, and some of the other awesome rappers who’ve been cool enough to stop by our magical program. But Fan Ran raps too. And he raps VERY well. Gosh, Noah Page didn’t even really know. Fan Ran was ON POINT rapping all night. He even stole Dub’s title of Best First Time Can You Rap To That? when he freestyled over Winter Wonderland. It was epic and more difficult than it sounds. Dub was upset, understandably, but Dub also earned a new title for himself tonight during can you rap to that: Best Jesus-Related Can You Rap To That? I don’t know why, but I think he’ll probably hold on to that one for a while.

I mean, I’d love to tell you about how great PHD Khari, Dula, This(), Sanji and Vos are. But are you guys sick of that? I mean, probably, right? I tell you ALL THE TIME about these guys. Plus, hopefully, you hear it for yourselves. Wait, what’s that? Is the jury divided? Okay, no. I WILL. But just real quick.

1. Dula is a phenomenally intuitive rapper who seems to be able to go for days. Lyrical and melodic with the kind of prowess that makes you think, “Oh, that’s easy! I’ll do that too.” Then you try and you’re terrible. YOU’RE NOT DULA.

2. PHD Khari is a poet. His voice is big like a dog you’d be afraid of. He has powerful delivery that is absolutely the only appropriate way to deliver the kind of ideas he raps about.

3. This() is, as they say, on some other poop. Not poop, but I’m not going to use profanity. There is no such thing as safe harbor on the internet! This() has potential that’d made an early 2000’s .com upstart cry a little. And he just plain THINKS differently. Do you know about the time he rapped all night in character as a middle-aged single mom?

4. Vos is a force of nature. He’s the wind. The cold one. And he’s currently gaining steam like my kitchen when I’m cooking pasta. J/K my kitchen is waaaay too dirty to cook anything in! LOLOLOLOL. But for real, Vos has always had raw talent. And his newest work shows it off in an appropriate light, finally. I’m SO happy for him.

5. Sanji is insane. He ate all my tic tacs last night, no lie. He just kept going back for more! But his rap. This guy is just always ready. His consistency is something I truly admire. He never slacks off. You could walk from twin tower to twin tower on his rope, with regard to the lack of slack. And his raps will cut you. Bring a band aid, I guess.

Okay, back to Fan Ran. Fan Ran is great. You just have to hear him rap. He makes some of us look like amateurs, I’m not ashamed to say. And he has a project coming soon with Nickelus F that is going to be STUPID good. You know Nick, I’m sure. Imagining him on Fan Ran’s beats just makes my chest a little tight. Like I ate the spiciest taco bell. Speaking of, has anyone seen Armando lately? I miss that guy. Dogfriend too. Of course, Dogfriend! Me and him. We were like this. Not This(). I know that’s confusing. I’m holding up my two fingers, but crossed. We were like that.

ANYWAY — the band. THE SECRET BONUS LEVEL BAND, that is. So, you know how we were talking about the whole “Are they hip-hop enough?” thing? The whole “Does is even matter if they’re hip-hop at all?” thing? Well, gosh. Tonight. They pulled out some stuff. Joe’s guitar. JOE’S GUITAR. He’s done this crazy thing the past few times where he’s like bending a string and unbending with the delay on. It sounds like it’s going backwards. Joe’s evolution across the course of the show has kind of inspired me a little. Sometimes I’m like, “Noah Page will never be a good rapper.” And then Joe does these left field things that just fit and work. And I think to myself, “This is the same Joe.” You know? And I’m like, “Noah Page could do left field stuff. Noah Page build his own little tree house in the left field, in fact. And he could live the rest of his life in peaceful left field coexistence with whatever parts of the field there are. Harmoniously. Like Joe.” Joe Barry, ladies and german. I mean, gentleman. I’m talking too fast. Brandon continues to chop down oak trees with his bass just for no reason other than he feels like it, I guess? And Jesse’s new gear, if you haven’t heard it. He’s got reverse stuff, stutters, and just a WAY cleaner sound. The band is just polished. That’s the word I always think of now. During this episode, I had the pleasure of facebooking Johnson (Pickle Rick) while they were on the air about the excellent job he’s doing as bandleader. He’s really the Bible. He looks good in that hat too.

Oh yeah, remember that funny story I was going to tell you? So, This() had an open mic night at his house. Joe Barry and Noah Page and Princess Beet Farmer and MC Correct and Vos and Dula all went. And those guys from IamI Collective. And some other weirdos. And there were rap battles and traditional Portuguese songs and our nation’s great national anthem and other songs and dancing, I mean REALLY GOOD dancing and you had to perform inside of this weird little cube in the garage. I mean, it was weird enough to warrant that kind of a run-on sentence, believe me. It was goofy and fun and I guess it doesn’t make for really a very good story. It’s just a funny thing that happened. Princess Beet Farmer danced in the middle of one of those circles people make to watch one person dance in. This() played the bass, which we all know now that he does VERY well. Dula narrated break dancing in a rap song way. Oh and Brianna Dunlap was there! She’s near her due date. It was cool to see her.