Cause & Effect: addy & Gnawing (a commonwealth of notions alumni edition)

On today’s Cause & Effect, Shannon from Commonwealth of Notions will be splitting the show between two local artists that are celebrating new releases in 2020. addy and Gnawing have been mainstays on the Commonwealth of Notions radio program as well as participating in the annual fundraising festival. The episode today will spend an hour on each artist to showcase their music, their influences, their creative peers, their favorite songs and the sentiments behind the songs selected for today’s playlists. Look below for bios for both bands and check out the playlist to see what each artist helped curate for today’s episode.

Following in the steps of a pair of electronics-embellished folk EPs, Eclipse is the debut record from Richmond, VA’s addy. As with addy’s previous work, Eclipse’s contemplative magic was produced entirely from home studios, lending a crucial flexibility to the album’s overall recording process, the final product of which belies its modest, DIY studio accommodations.

Lead single “Planted” captures many of Eclipse’s salient elements with its wailing violin and pedal steel, evoking the strong emotions associated with healing and growth. On “Easier,” addy longs to alleviate the pains of a near-and-dear friend, whereas the album’s triumphant apex “Eclipse” turns the reflection inward in an entrancing, climactic ode to the self, punctuated with notes of optimism and hope. 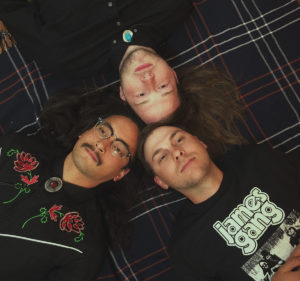 Gnawing began as a one person recording project for John Russell in the living room of a dilapidated punk house in North Carolina. Prior to Gnawing, John had spent his time in bands like Alright, Planet Creep, Earthmover, and others, but never found himself in a position to grow his own sound. After recording and self-releasing a 5-song cassette of his debut songs as Gnawing through his own label, Hilltop Recordings, John found himself relocating to Richmond, VA and wanting to start a band in the new city.

Growing up on 1990’s alternative rock like Dinosaur Jr., Pavement, The Lemonheads, Sugar, Gin Blossoms, and more, John wanted to scratch a songwriting itch that would bring him back to his roots. After digging into writing a bit more, he decided to expand Gnawing into a full band project, revisiting the original EP and growing their sound as a trio. Adding Richmond natives Christian Monroe (New Lions) and Chris Matz (Antiphons), Gnawing found a new energy with new ideas.