So the original inspiration for tonight’s show came from an ad I saw in NOLA’s Offbeat Magazine about a Jazz and Heritage Foundation program – Chanteuse: Celebrating New Orleans Women in Music which over the course of a week was going to feature 6 concerts as well as one evening of conversation. The first 6 artists tonight were supposed to be featured during that week in March although I am certain several dates were cancelled.

While I was thinking about how I might expand this for a full 2-hour show, Talia asked me (several months in advance) to cover Louisiana Dance Hall tomorrow night. I accepted and ran the idea for a female artist show past Bill Thomson and he made a bunch of great suggestions and I was locked in.

Unfortunately for Talia the concert she planned to attend was cancelled (like everything else right?) and she didn’t need me to sub tomorrow night. But I had already prepared a show and I didn’t do a NOLA Jazz Fest show this year so I thought maybe I’d just do the Chanteuse show on my on show. The more I tossed that idea around the better it sounded. The music of NOLA has helped me stay sane throughout the pandemic. I listened 8 days over two weekends to the WWOZ Jazz Festing in Place special and last week I streamed a new NOLA music documentary called Up From the Streets. It was excellent and a portion of the money I paid to stream the films went to the independent theater of my choice (The Byrd) and part of it went to the Jazz and Heritage Foundation.

The end result – some really great tracks from NOLA’s finest female music-makers – some I ma sure you are familiar with and many – not so much. Enjoy. 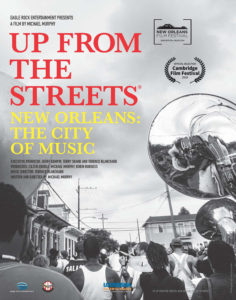