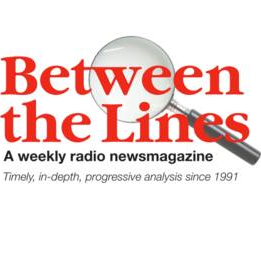 Between The Lines is a weekly syndicated half-hour news magazine featuring progressive perspectives on national and international political, economic and social issues.

Because Between The Lines is independent of all publications, media networks or political parties, we are able to bring a diversity of voices to the airwaves. This award-winning program provides a platform for individuals and organizations generally ignored or marginalized in corporate media.

Each week, Between The Lines features:

Since 1991, Between The Lines has provided in-depth, timely analysis on a wide range of political, economic and social issues including: the history and consequences of two U.S. wars with Iraq; increasing disparity in wealth in the U.S.; coverage of the global social justice movement and related protests challenging the free trade, corporate-driven policies of the World Trade Organization and World Bank/International Monetary Fund; post-9/11 erosion of civil liberties; constitutional protections and international law in the U.S.; progressive electoral victories sweeping Latin America; the crisis in the U.S. health care system; international grassroots mobilization to confront global climate change; racism permeating the prison industrial complex; efforts to repair flaws in the U.S. electoral system and increasing opposition to a new nuclear arms race in space.