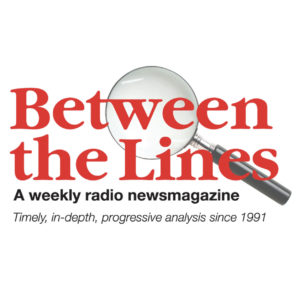 Between the Lines: Fridays at 9:00 AM

Between The Lines is a weekly syndicated half-hour radio newsmagazine featuring progressive perspectives on national and international political, economic and social issues. Squeaky Wheel Productions is our 501(c)(3) nonprofit production company and distributor.

Because Between The Lines is independent of all publications, media networks or political parties, we are able to bring a diversity of voices to the airwaves. This award-winning program provides a platform for individuals and organizations generally ignored or marginalized in corporate media.

Each week, Between The Lines features:

A five-minute summary of some of the week’s under-reported news stories gathered from the alternative press and other sources.

In the days leading up to the Persian Gulf War in 1991, non-commercial WPKN Radio’s (Bridgeport, CT) public affairs producers Scott Harris, and Denise Manzari, along with other contributors, created Between The Lines, a half-hour radio newsmagazine to probe the causes and conduct of the conflict. After the Persian Gulf War ended, the program’s producers continued broadcasting Between The Lines, but with a broader focus: providing a platform for activists, journalists and academics generally ignored or marginalized in the corporate media. The program’s primary focus is to provide a substantive progressive alternative to corporate news obsessed with violent crime, celebrities and “infotainment.”

Since 1991, Between The Lines has provided in-depth, timely analysis on a wide range of political, economic and social issues including: the history and consequences of two U.S. wars with Iraq; increasing disparity in wealth in the U.S.; coverage of the global social justice movement and related protests challenging the free trade, corporate-driven policies of the World Trade Organization and World Bank/International Monetary Fund; post-9/11 erosion of civil liberties; constitutional protections and international law in the U.S.; progressive electoral victories sweeping Latin America; the crisis in the U.S. health care system; international grassroots mobilization to confront global climate change; racism permeating the prison industrial complex; efforts to repair flaws in the U.S. electoral system and increasing opposition to a new nuclear arms race in space.

In presenting interviews connected with current events, political issues and societal debates, the program serves as a networking resource for communities fighting for social justice here in the U.S. and around the world.

Each week’s program offers timely information on how to become active on issues we cover. Every interview segment features information about pertinent websites to facilitate contact between our audience members and groups taking a stand on critical issues of the day.

Between The Lines’ website offers text summaries, selected interview transcripts, an audio archive of our past programs and links to additional resources. The website offers subscriptions to our weekly program and transcripts via podcasts, RSS feed and email — and a gateway to our online community.

Between The Lines’ production staff includes journalists and community activists who have a passion for disseminating information and viewpoints that all too rarely reach the public. Our producers and writers are affiliated with community and professional media and non-governmental organizations. They contribute to regional and national media.