Gypsies, Crayons, And Other Music For Uplifting Gormandizers

Lots on tap tonight. We’ll play a bunch of new music and some new crate digger stuff too. We’ll do a set of gypsy music featuring a couple of tracks by Gogol Bordello. I’m giving away a pair of tickets to see them at The Jefferson Theater in Charlottesville. 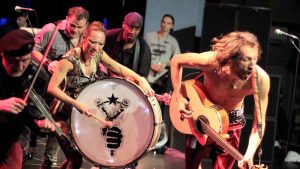 We’ll also do a crayon set. Last Friday was National Crayon Day and the suits at Crayola used it as an excuse to drop Dandelion from it’s core 24 box. I think Dandelion will remain in the larger collections unlike some other great colors that have been axed due to PC – Prussian Blue, Indian Red, and Flesh come to mind. I’m not gonna stand for it any longer. Let’s march – who’s with me?

Lots of other great tunes too – like new releases from Dylan, Isbell, Foster and others. Keep it tuned here.