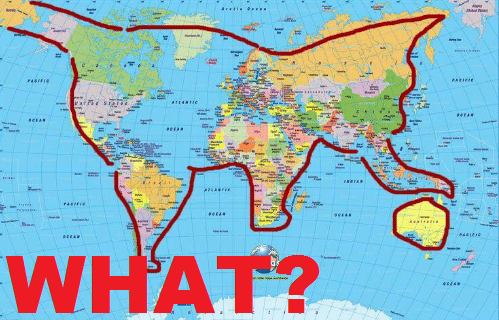 Today, an episode of Cause and Effect that Noah Page and Jesse Lyell of Secret Bonus Level host an kind of, I guess, you know, they do an okay job. Why not? Here’s the thing: they did it about Geography.

Virtually the entire country of Norway was covered with a thick ice sheet during the last ice age, as well as in many earlier ice ages. The movement of the ice carved out deep valleys, and when the ice melted, the sea filled many of these valleys, creating Norway’s famous fjords. The land is still rebounding from the enormous weight of the ice (isostatic rebound), “growing out of the sea” several millimeters a year. Rebound is greatest in the eastern part of the country and the inner part of the long fjords, where the ice cover was thickest. This is a slow process, and for thousands of years following the end of the ice age, the sea covered substantial areas of what is today dry land. The sea reached what is today an elevation of 221 m in Oslo (Aker), 25 m in Stavanger, 5 m near Stad, 180 m in Trondheim, 50 m in Tromsø and 75 m in Kirkenes. This old seabed is now among the best agricultural land in the country.

Geography, you might say to yourself, isn’t like the MOST Cause and Effecty type of topic. Maybe? Right? NO! You big dummy. It’s perfect. If we were hosting literally (figuratively) ANY other show on this ridiculous station, we’d by default have some weird theme. And so look, we do! Okay? Can we just have fun and live and et cetera? Just for once?

Still no good? Okay, think about it like this. This is the goof one. It’s like when Mr. Bighead’s son made that episode of Wacky Deli where it’s the mayonnaise.

This is a list of the extreme points of Peru, the points that are farther north, south, east or west than any other location.