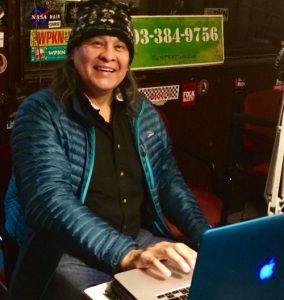 First Voices Radio, hosted by Tiokasin Ghosthorse: Thursdays at 9:00am

First Voices Radio brings to the airwaves the experiences, perspectives and struggles of Indigenous people who have been almost totally excluded from both mainstream and progressive, alternative media. Our purpose is to help ensure the continuance and survival of Indigenous cultures and Nations by letting the People tell their own story, in their own words, and often in their own languages and ways of speaking. And with as little outside interference and interruption as possible.

As we open up the airwaves week after week to the voices seldom heard in the last 518 years, it is our hope that the newcomers to this Land – that is, every immigrant group – will begin to question their assumptions about Indigenous people here. We hope they become educated and informed, get activated, break down their romanticization, break free of their stereotypes, and begin to form real relationships with Indigenous communities based, finally, on respect and real understanding.

This one hour is devoted to bringing the voices of the Indigenous Peoples of Turtle Island (i.e., North America) and connecting their struggles with those of other Indigenous Peoples around the world. And while never forgetting that standing upon Mother Earth is a great responsibility.

We ask our guests with great respect to do the honor of coming on the program to offer their knowledge, wisdom, and experience, a knowledge that has been handed down over hundreds of thousands of years. It is a responsibility we take very seriously, and we know it is with great urgency that we ask these voices to be shared in these times of change. We offer our listeners a perspective they have been missing for far too long – the First Voices of the Indigenous peoples – the “voice” America has tried to silence.

Tiokasin knows that First Voices Radio belongs to all the Native or Indigenous peoples throughout Mother Earth. The responsibilities that can be taught by listening to the real land owners (so to speak) and understanding the knowledge, the wisdom, the struggles, and the unheard voices.

It is said, “if the lies continue about Native peoples it will create an illusion, all Americans will dearly pay for in the future…and the future is now”. What kind of world are Americans creating with their privilege of denying Native people’s voice and the reality of truth Natives experience daily.

Tiokasin’s brings his global perspective experience of living with and understanding these two worlds – Indigenous and non-Indigenous. Indigenous knowledge empowers through inclusion, by teaching responsibility of choices and contributing to an emerging world affecting Mother Earth.

We as humans often revolutionize [regurgitate] the same history, by the same system and by the same people who bring destruction to Mother Earth. Many people who continue to support systems of warmongering are not only destroying their own ability to live with Mother Earth, but also only think of wars as political, religious or racial hatred. First Voices Indigenous Radio since 1992 has been bringing the voices of Indigenous peoples defending Mother Earth. We have always understood the bigger war is the war against Mother Earth.