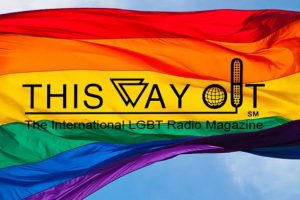 This Way Out, hosted by Greg Gordon: Wednesday at 9:30 AM

“This Way Out” is the award-winning internationally distributed weekly LGBT radio program, currently airing on over 200 local community radio stations around the world. The half-hour “magazine”-style program is produced in Los Angeles and distributed to stations via two free-access Web sites, www.radio4all.net and www.indymedia.org, as well as through Pacifica Radio’s Audioport and KU satellite, and via satellite in Australia on the Community Radio Network. The show is additionally postal-mailed on CD to stations that have no online access, and to individual subscribers. You can also hear “This Way Out” via direct satellite to home and cable outlets across Europe, and in Europe, the Middle East/Africa and Asia/Pacific on the London-based World Radio Network, or “tune in” via our free podcasts.

Despite the limitations of a “tattered shoestring budget”, “This Way Out” programming has been honored with multiple awards from the U.S. National Federation Of Community Broadcasters and the Radio and Television News Association, by the Gay and Lesbian Alliance Against Defamation (GLAAD), Parents, Families and Friends Of Lesbians and Gays (P-FLAG), the Los Angeles chapter of the National Lesbian and Gay Journalists Association (NLGJA), and internationally by Tupilak (the organization of lesbian and gay cultural workers in the Nordic area).

We’ve been on the air since April 1988! Summaries of recent programs are available, and if you like what you see, you can order a CD copy of any past show. You can also subscribe to get CDs of all our future shows as they’re produced, and for less than the cost of an average newspaper subscription (to cover our duplication and mailing expenses).

“This Way Out” leads off each week with “NewsWrap”, a summary of some of the major news events in or affecting sexual minority communities, compiled from a variety of media outlets around the world. If you see a local news story that you think deserves coverage, please copy/paste the text into the body of an email message, including the name of the media source and the date, and send it to us! Thanks!

In addition to NewsWrap, each edition of the program consists of several other segments, which can include interviews with authors & performers, news feature stories, humor, poetry, readings from gay/lesbian literature, and more!

“This Way Out” is also punctuated with a wide variety of music, especially self-produced recordings by openly lesbian/gay performers (which rarely receive commercial radio airplay).

“The Rainbow Minute,” produced by Judd Proctor and Brian Burns at WRIR, is a recurring featured segment on “This Way Out.”