Tonight on Frequency (8-11PM)…We will be giving away two tickets to Purity Ring @ The National with opener KI:Theory. Friday, September 9th. Doors at 6:30pm   So..listen in & call in to win. 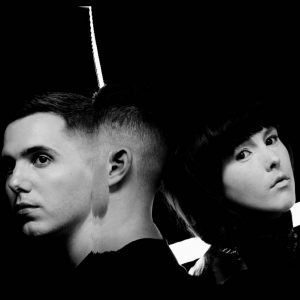 Purity Ring is a Canadian electronic music duo formed in 2010 and originally from Edmonton, Alberta. The band consists of Megan James and Corin Roddick. Check out their site for all the details: http://purityringthing.com

Jesse & Joanna O from Turnstyle caught up with Canadian music duo – Purity Ring,  ahead of their tour stop through RVA this Friday. Check out the chat below.

PR: We do our best to make music that is unqualifiable in terms of description, but in the past we’ve called ourselves as ‘future pop.’–forward thinking pop music.

You both also DJ?

How do your individual DJ sets differ from a Purity Ring experience?

PR: They’re very different.  The live show is a spectacle–We’ve gone great lengths to have really intense and unique stage production and we’re obviously performing our own music.  It’s the ‘purest’ example of our music in a live setting.

We DJ on the side for fun, and it’s an opportunity for us to share our current influences and favorite music with fans. We incorporate some remixes of PR material, but mostly we’re not playing our own music and there’s no stage production or anything.

What is your current music setup for this tour?

PR: You’ll just have to come to the National and check it out.  It’s a completely custom lighting and synth set-up that we’ve spent the past two years perfecting.

What song from your current album best represents your sound?

PR: We aim to make cohesive records that succeed on the merits of individual songs’  and the album as a whole, so I can’t really pick one song that best represents us.