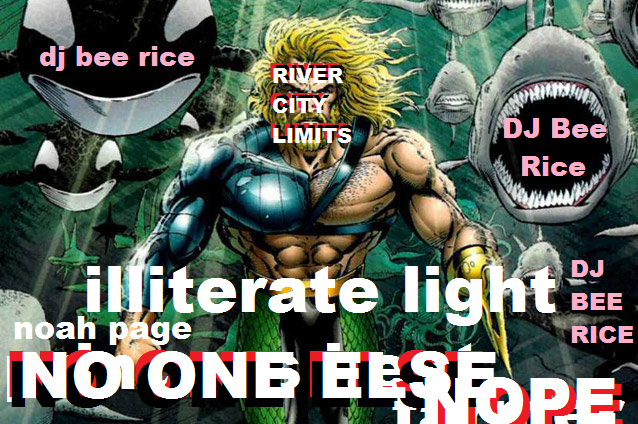 Noah Page purposely didn’t promote very much of anything about what he was doing on today’s River City Limits. Why? Because today’s episode is all about SURPISES. Secret Bonuses ™ you might even call them. Secret Boni? If it ends in “us” is it Latin? And then you have to use an i to make it plural? Like Octopi? Idk.

Anyway, Noah Page plays us some local rap. And the GOOD stuff, now. Lithium God, RT, Freakolafat, Reppa Ton, Cakes, Noah-O, and even takes it back to the old days of the Jazz Poet’s Society. PLUS we get to hear a special replay of some of the FIRST EVER performances on his amazing show, Secret Bonus Level. Secret Bonus Level comes on Wednesday nights on WRIR from 1 am to 3 am. It features live performances, live music, live rap, goofiness, games, lyrics, poetry, and just EVERYTHING.

DJ Bee Rice has rap. His amazing record collection. His famous rectangle note pad. This was his first time hosting a show from Studio D, where Secret Bonus Level also broadcasts from. So he got a little taste of that Secret Bonus. He played this really cool record called Eyes of Love, which was recorded by some guys in jail in Ashland waaaay back in the 70’s or 80’s. NICE soul stuff. Also Brice played TEN. THOUSAND. HOURS. You know Noah Page was losing it! And Sleaze. RIP Sleaze!

Illiterate Light is a band I’d never heard of before they asked to come on this show. I’m SO GLAD they did though. Because NOW I KNOW, you guys. And SO DO YOU! And they went directly from the radio to KILL a show at the Camel. These guys were sharp and hard and crazy. Funkiness. The one guy plays guitar and also plays bass with his feet on one of those pedal things you have on a pipe organ. The other guy is a drummer but he’s got this specially rigged kit where he stands up. THESE ARE NOT SIT DOWN GUYS. They played us some music that had never been heard before ANYWHERE outside of one one in Harrisonburg. They also told us all about their video, their EP, and a bunch of cool merch that sounded so neat I didn’t even really believe it could really be real all the way. Really! And super nice dudes. I hope they’ll come back again!

They didn’t even mind the moment that Noah Page messed up the show. HAHA! Biggest surprise of the night: Noah Page doesn’t know what he’s doing. He was trying to interview these guys, not realizing they were going, “Check? Check check? Can you hear me?” live on the air and he was the only one who couldn’t hear them at all. Oh gosh! Noah Page, ladies and gentlemen.