So I had sort of worked up a Cause and Effect for this past Saturday and a technical glitch resulted it in not making onto the air. I really liked the theme and the setlist, so I toyed with it a little bit and am psyched to run with it tonight. So the idea was to look at two completely different music scenes that were taking place about 2500 miles from each other. One in East Nashville, TN and the other in Laurel Canyon in LALA Land.

I originally planned to to an East Nashville sow after reading Guy Clark’s biography this summer. I was just fascinated with the scene there in the 70s, but then after watching two documentaries about Laurel Canyon it occurred to me that as different as those two scenes were they both had an impact on music that has become a huge genre – Americana.

One scene was the outlaw country scene and the other was the laid back singer songwriter hippie scene. As different as the two worlds were I think together they helped spawn the American genre that is so popular today. So please sit back and listen as we travel from East Nashville to Laurel Canyon. 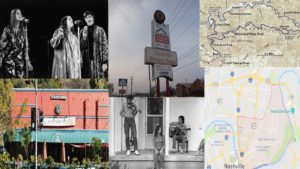