Chopping It Up Geek 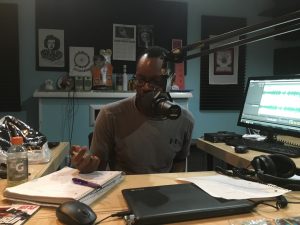 If you have a passion for something, for example, comic books, sci-fi, fantasy, cartoons, video games, movie, music and sports, then you will love the newest program produced by WRIR. It’s called Choppin It Up Geek. Your host is Kutural Khameleon. He shares his love of culture and invites others to share their perspectives, especially minorities who are not represented in geek culture. It will air at Noon on the second and fourth Tuesday of each month. We talked with Kutural Khameleon about why he wanted to spotlight this cultural phenomenon and his thoughts on the Wonder Woman movie.

How does your show fulfill the mission of WRIR? (To air underrepresented news, views and music to build cultural diversity in the city of Richmond): Choppin It Up Geek brings to light subjects of a geeky/nerdy nature. I address geek culture from a minority perspective. I will bring positive examples of minorities as experienced in geek culture and culture in general.

How did you hear about WRIR? I heard of WRIR by randomly tuning into the station and listening in. I liked what I heard and I continued to tune in.

Why did you decide to volunteer with WRIR? I wanted to meet new people and learn new skills. I hope that eventually I would be able to create my own talk show and now a year later I am realizing that dream.

What advice would you give someone who is interested in volunteering at WRIR? I would tell volunteers to be committed, by putting effort and hard work into everything that you do. Take pride in the station. Take the time to get to know as many of your fellow volunteers as they are some amazing and cool people.

So, Wonder Woman. Thumbs up or thumbs down? Oh, Wonder Woman was the Sh****T!!! I dare say it was better than Guardians of the Galaxy. Guardians was good, but this is the first female superhero movie that possessed a coherent, good storyline, enough action, and top notch special effects. This movie could open doors for future female-lead superhero movies. So, I give it a resounding two thumbs up.

Choppin It Up Geek airs on the second and fourth Tuesday of the month at Noon. This program is a great example of how your support of WRIR allows someone to fulfill his/her dream of hosting a program. Kutural Khameleon began volunteering on the production committee for the Saturday hangouts. He learned audio engineering in our talk host studio; eventually producing episodes of WRIR’s local shows. He then submitted his own pilot which was approved to air. If you are a self-described geek, share your idea for a show topic by sending an email to [email protected]. 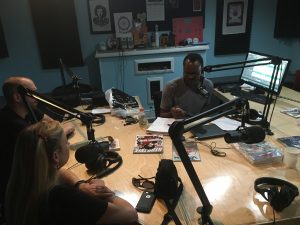