Covering the Protests in Charlottesville & Richmond

On Sept. 16, the pro-Confederate rally in Richmond was practically in WRIR’s back yard. The fact that the streets around the station were blocked with barricades and large utility trucks did not stop our volunteers. Your Saturday morning DJs hosted their shows as usual but with songs that reflected the mood of the morning. DJ Paul G. played Phosphorescent’s version of Woody Guthrie’s “This Land is Your Land” and ended with Ted Leo’s powerful song, ”Can’t Go Back.” 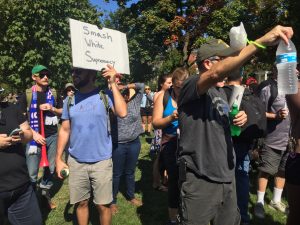 Counterprotesters meet on Monument Avenue near the Lee monument Sept. 16.

WRIR also dispatched teams of volunteers who were armed with microphones and digital recorders. Thanks to their determination, you heard the raw emotions of the day. Krysti, producer with Open Source RVA, walked with Hawk Newsome and the members of the Black Lives Matter of Greater New York chapter. “These individuals spend their energy supporting people who face racism and inequality in their community,” she said. “I was thankful to hear first hand about their personal experiences and the reasons why they are a part of the Black Lives Matter movement… I gained a better perspective on their mission.” Cameron and Don spoke with members of a local Antifa group on Open Source, and Don also interviewed Charlottesville DJ Tyler Magill, who suffered a stroke after being hurt by neo-Nazi protesters at the University of Virginia on Aug. 11.

More is to come! WRIR volunteers were on the road to D.C. to cover the March for Racial Justice and Black Women’s March held Sept. 30.

Thanks to Krysti, Chetara, Melissa, Amanda, Carol, Cameron, Nick, Jacobi and Don and the producers of Open Source RVA for their fearlessness in covering these rallies. And thank you for supporting WRIR so we can purchase the equipment and train the volunteers to be independent community journalists. Stay tuned for powerful episodes produced by the volunteers at WRIR airing on such programs as Open Source, noon on Fridays, and WRIR Presents, 11 a.m. on Wednesdays. 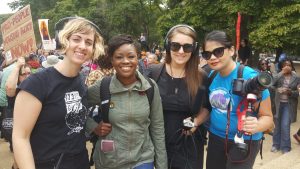 WRIR volunteers travelled to DC for the rally on Sept. 30.