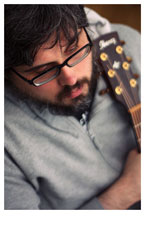 For the life of me, I can’t recall how I ‘found’ Matt Stevens. Chances are good he found me … In the long run, and the long haul, it doesn’t really matter. What matters is his music. That's why I play it here …

From the formidable The Fierce & The Dead to his acoustic outings, Echo and Ghost, Stevens leaves a mighty big footprint. Add to that his tireless working of new media, impressive web presence, and vigorous DIY work ethic, it’s clear he has created a space that only he can fill.

In between a flurry of projects — Ghost, preparing the new The Fierce & The Dead, freely advocating and promoting remixes of his music, video projects — Matt was kind enough to take some time out to fill us in on his admiration for his supporters, distributing his music, what lies in store for the next record and the difference between prog and post-rock {Spoiler: he doesn’t know either}.

Thanks for checking … see you next Friday …

As always, you can poke through some earlier shows and playlists/podcasts to hear Matt Stevens/The Fierce & The Dead … and a lot of other candy for yer head : Sunrise Ocean Bender podcasts