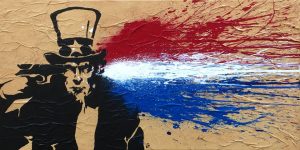 “Don’t be so gloomy. After all it’s not that awful. Like the fella says, in Italy for 30 years under the Borgias they had warfare, terror, murder, and bloodshed, but they produced Michelangelo, Leonardo da Vinci, and the Renaissance. In Switzerland they had brotherly love – they had 500 years of democracy and peace, and what did that produce? The cuckoo clock.”

I think we’ll go with some good ol’ punk catharsis this afternoon.