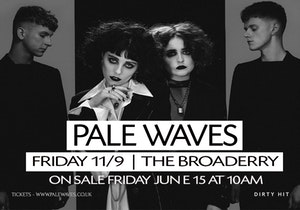 tonight’s show is mostly about the tons and tons of new music we’ve been getting here at the station, however we will be starting off with a few bands that will be playing in Richmond and the surrounding areas in the next couple of weeks…such as the Pale Waves show happening this Friday at The Broadberry…i will be giving away a pair of tickets to see this one!

Vaxsination:  i’ll be djing at Fallout here in Richmond on Wednesday, November 14th!  if you like the Dog Germs music, then you will like the Vaxsination music!  hope to see you all out there dancing!