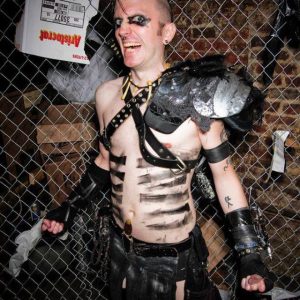 if there is a Rock ‘n’ Roll Heaven, then it just got a lot louder and friendly all at once this past weekend. we start tonight’s Dog Germs with a celebration of what Brandon Bates meant to Richmond (and the rest of the world actually!) by playing a set of Low On Sanity tracks. Brandon was not just a singer for one Richmond’s most loved local bands, but he was a personality that could be found throughout all facets of our community through his work at The Byrd Theater, his many guest appearances on WRIR, and his presence at most of the city’s music venues, not only as a performer, but as a supporter too. he was a dear friend and loyal supporter of Dog Germs and is truly missed. RIP Brandon Bates (aka Bob From Accounting)

also happening on tonight’s show, your chance to win a pair of tickets to next Tuesday’s Suicide Commando show happening at Fallout, or tickets to see TimeCop 1983 at Fallout on May 31st. we’ll hear music from these great bands as well as several others playing in Richmond and the surrounding areas in the next couple of weeks.

all this and much more!